CALORIES AND HEALTH BENEFITS IN SPINACH

Spinach can be added to all different diet types and can be incorporated into low-carb recipes because of its low calorie, high fiber food status. Spinach adds volume, color, texture, vitamins, and minerals to all meal types. Whether cooked or raw, spinach is a nutrient-packed food.

Spinach and other leafy greens or non-starchy vegetables are sometimes considered a “free” food on low-carbohydrate diets because they contain negligible amounts of carbohydrate (less than 5 grams in one cups worth) and have little impact on blood sugar.

There are three different types of spinach, each of which has several varieties within its class that vary in size and shape. Savoy spinach has dark, green, crinkly, and curly leaves. Flat/smooth leaf spinach is easier to clean then savoy and is often grown for canned and frozen spinach. Lastly, semi-savoy has the same texture as savoy with slightly crinkled leaves and is grown for fresh market and processing. Different types of spinach lend themselves favorably to different types of climates, therefore, fresh spinach is available all year long. Frozen and canned spinach can also be purchased all year.

One cup of raw spinach or half cup cooked contains about 7 calories and only 1 gram of carbohydrate. Most of the carbohydrates found in spinach come from fiber, making spinach a very filling vegetable. In addition, one cup cooked contains half a day’s worth of vitamin A, five percent of daily iron needs, vitamin K, vitamin C and other B vitamins, such as B6, riboflavin, and folate. 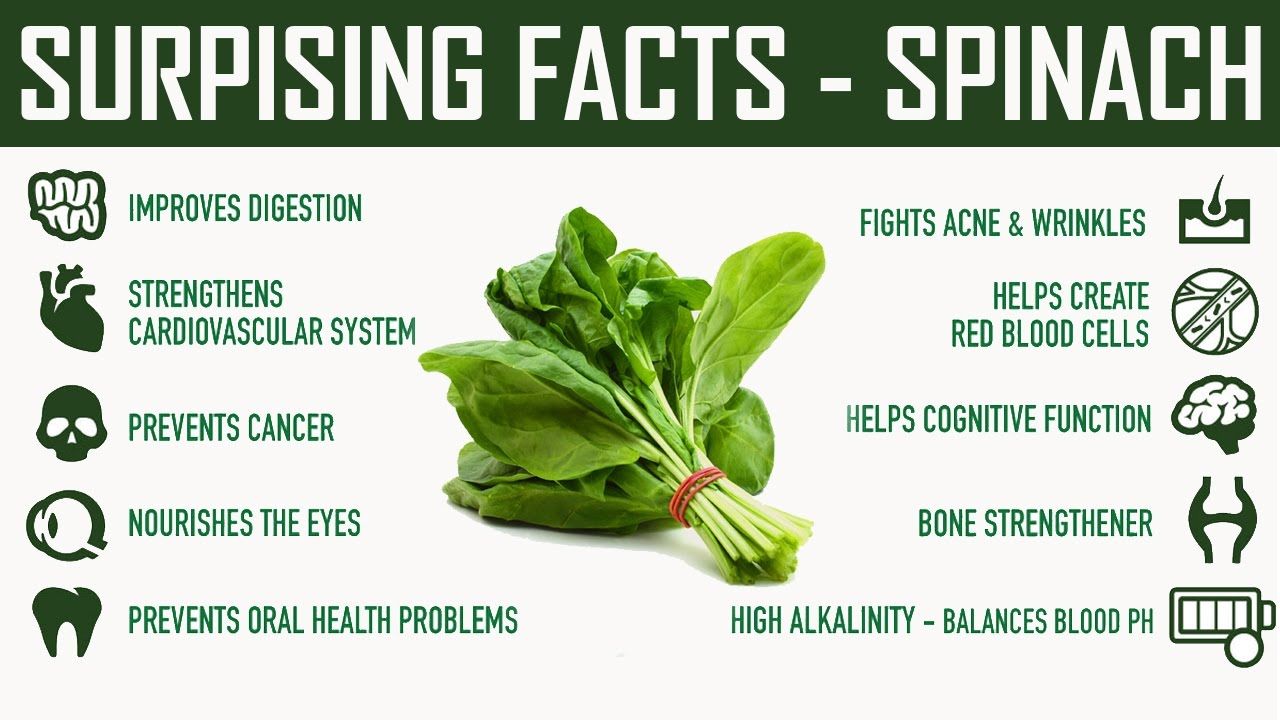 There are a multitude of vitamins and minerals found in spinach, making it a highly nutritious food. Spinach is an excellent source of fiber, vitamin K, vitamin A, vitamin C, folate, and manganese. It is a very good source of vitamin B6, riboflavin, magnesium, potassium, and iron, and a good source of calcium and vitamin E.

In addition to being packed with vitamins and minerals, spinach contains chlorophyll, which gives it its green pigment. Chlorophyll may be able to block the carcinogenic effects of harmful byproducts that are generated when grilling foods at a high temperature. In addition, limited data from animal studies suggest that supplementation may decrease oxidative damage induced by chemical carcinogens and radiation.

Spinach is also one of the non-animal sources of iron. Iron is essential in many biological functions, such as oxygen transport and storage, energy metabolism, and DNA replication and repair. Iron-deficiency is a common cause of hair loss, which can be prevented by an adequate intake of iron-rich foods like spinach.

Keep your intake of foods rich in vitamin K about the same each day. For example, if you plan to eat a cup of these foods daily (spinach, broccoli, kale, etc), do so every day.

It’s important not to make any major changes to your intake of vitamin K.

Raw spinach shrivels down considerably when cooking. Typically, a 10-ounce bag of spinach, for example, will condense to about 1.5 cups of cooked spinach.

Some water-soluble vitamins, such as vitamin C and B vitamins, are lost when cooking spinach. However, because most people eat more cooked spinach than raw they typically make up for the nutrients that are lost by eating a larger portion.

If possible, choose spinach that is organic, as spinach is on the dirty dozen list and does have more residue of pesticides than other vegetables.

If you are purchasing spinach in a bag or box, purchase it as fresh as possible. The fresher a product is the more nutritious it will be.

You’ll know your spinach has gone bad when it begins to wilt or if it starts to smell.

For optimal storage, store pre-washed and spun greens in a ziplock bag or plastic container lined with a dry paper towel in the refrigerator for up to 3 weeks. You can also freeze your greens. To do so, blanch your spinach in boiling water for one minute and then place it in an ice bath to cool. Next, wring out as much water as possible and form the spinach into single serving balls, place in a ziplock bag in the freezer. Blanching the spinach first helps to lock in vitamins and minerals and gives it its beautiful, bright green color.

Spinach grows in sandy soil and must be rinsed repeatedly in cold water to remove all traces of grit from the leaves.

Spinach works well with moist cooking methods, steaming and sauteing are most commonly used. Be careful when cooking with oil, as spinach can act like a sponge and soak up a large portion of oil, making it high in calories.

Spinach can also be used raw as a green salad or an ingredient in smoothies. Get creative and use spinach as a replacement for bread when making wraps, or as an addition to egg scrambles. Chop it and add it soups and casseroles or stuff food protein sources with it for a fiber and protein filling meal.

Use spinach to make anything and everything, from dips to salads to casseroles to additions to pastes, the options are endless.